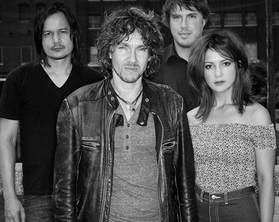 Lisa Detanna and Gooding have paired up to teach kids about financial literacy through multiple concerts across the US.
​
Gooding is touring their new album “We Are The Dark Stars”, crisscrossing both the US and UK. They recently helped found the 501(c)3 charity "FundingTheFutureLive.org" to perform and talk to high school students about financial literacy.

Songwriter/singer and namesake “Gooding” and his musical family, Jesse Rich, Billy Driver and Jenny Wood, have been touring and recording non-stop for the better part of their lives. Their shows are infused with the confident energy and heart-on-your-sleeve emotion that only comes from childhood friends living out their dream on the road.

Audiences witness what is almost a secular church revival: thundering drums and bass, soaring harmonies, blazing guitars, poignant lyrics, all delivered with enough soul and honesty to make the most jaded critic remember why every kid at one point has thought about grabbing a guitar, or a set of drum sticks.

Through relentless touring and honest interaction with their fans, the band is building the kind of brick by brick long-standing career that major label artists aim for, but doing it with their fans along for every step of the ride. They drive a crowd-funded bus lovingly called "lil red #1" which runs their portable studio off solar panels, and they consider a huge step up from the vans and trailers they have ran into the ground through non-stop touring in the midwest.

Besides being a ferocious live performer and a relentlessly prolific songwriter, Gooding feels that making music and being in the public eye serves no purpose if it’s not serving the greater good.

2010 saw the band from Wichita hitting every state in the lower 48. Their 7 months of non-stop travel included shows donated to 16 Military Bases and Walter Reed Hospital, and the band was honored.